The DNC Destination Management Plan to guide industry on priorities strategies and required actions that will drive the growth of the visitor economy at a regional level. The plan provides the foundations on which future local plans can be built and updated to provide a common vision. This document is an adaptable plan that will be reviewed annually by DNC in consultation with Destination NSW and industry stakeholders.

The Value of Tourism 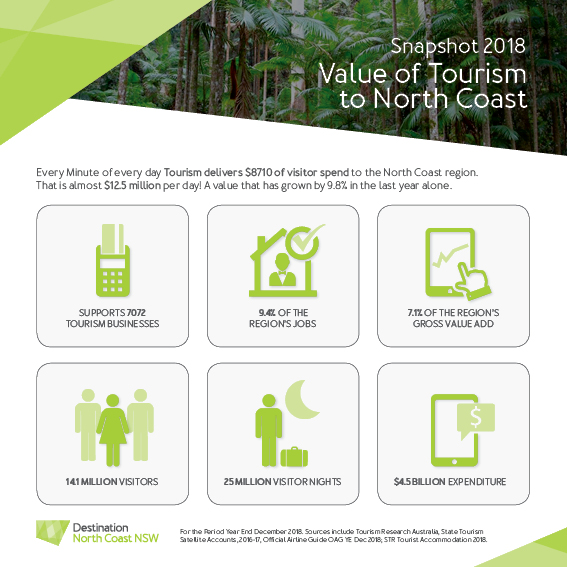 The North Coast is the number one region for tourism in regional NSW. We believe for this success to be sustained that we need to have a shared vision and understanding of the Value of Tourism to ensure that we continue to evolve the perception of the region whilst improving the visitor experience and maximising the visitor economy.

An exciting opportunity for businesses and communities across the Northern Rivers has been unveiled today with the launch of the Northern Rivers NSW Brand. A planned public launch was cancelled due to Coronavirus restrictions but a soft launch is underway this week to coincide with the opening of the new Ballina service centre which will house a Northern Rivers VIC highlighting the new brand.

What is the Brand
The Northern Rivers NSW Brand is the symbol of a new economic and cultural era for one of New South Wales’ oldest, diverse and alluring regions, representing the Northern Rivers of NSW, from the Tweed border to the Clarence Valley.

The Northern Rivers NSW Brand ties these communities together, connecting a population in excess of 250,000, physically connected by the rivers of northern NSW, they are now connected by a common brand demonstrating tangible scale.

How is the Brand Funded
The NRT has developed extensive budgeting and business plans to oversee the implementation phase (2 years). Funding is being sought by contributions from Industry leaders (Founding Partners), councils, State and Federal Governments, enabling free access to the brand for business across the region for a minimum of 2 years. For more information, go to the website at www.northernriversnsw.com.au.

The Australian Tourism Awards were held in Canberra on Friday 6th March, 2020.

Congratulations to all finalists and especially to our very worthy North Coast winners!

A strong showing from North Coast finalists. Check out all WINNERS and place getters.

The presentations delivered by our expert speakers are available here.

More than 150 industry representatives gathered in stunning South West Rocks to see who would take home the coveted awards and to witness the induction of two businesses into the Hall of Fame.

Get Connected is Destination NSW’s website membership program. Simple and easy to use Get Connected membership is free and is open to all tourism operators within New South Wales.

Details of this and other online opportunities offered by Destination NSW can be found here.

The industry network contact list has been produced to aid new and/or expanding tourism and events business operators. It serves as an introduction to the types of organisations in the marketplace that can help you.

Media and industry operators can search and download images for free from Destination NSW’s image library. The collection is constantly being updated and includes great images of city and regional destinations, experiences and events.